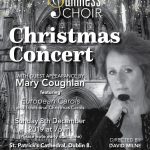 The choir performed beautiful carols from around Europe, including England, France, Russia and Spain, reminding us that Christmas is an international celebration.

This year we were delighted that Mary Coughlan agreed to be our special guest. In addition to hearing Mary sing unaccompanied, we had the pleasure of performing a number of songs with Mary arranged for choir by our musical director David Milne.

Mary is Ireland’s greatest female singer as in the space of over twenty-five years and ten albums she’s made the most grown-up, uncompromising, wholly personal and utterly universal music on either side of the Atlantic about what goes on between men and women. No one can fail to be moved by the emotional depth, expression & power in her voice, forged from an extraordinary life.

Born in Galway 60 years ago, Mary has battled and overcome childhood trauma and near-death from alcoholism and drug addiction. After hitting rock-bottom and extensive periods in psychiatric hospitals and rehab centres she literally pulled herself out of the dregs of a vodka bottle to confront the foundations of her problems head-on and sort out her life. She has been sober since 1993.

Her ability to connect so emotionally & empathically with both the song & her audience is testament to her inner strength, and to the power of transformation & redemption. Her songs resonate with life experience, her husky voice pulling every ounce of emotion from the music.